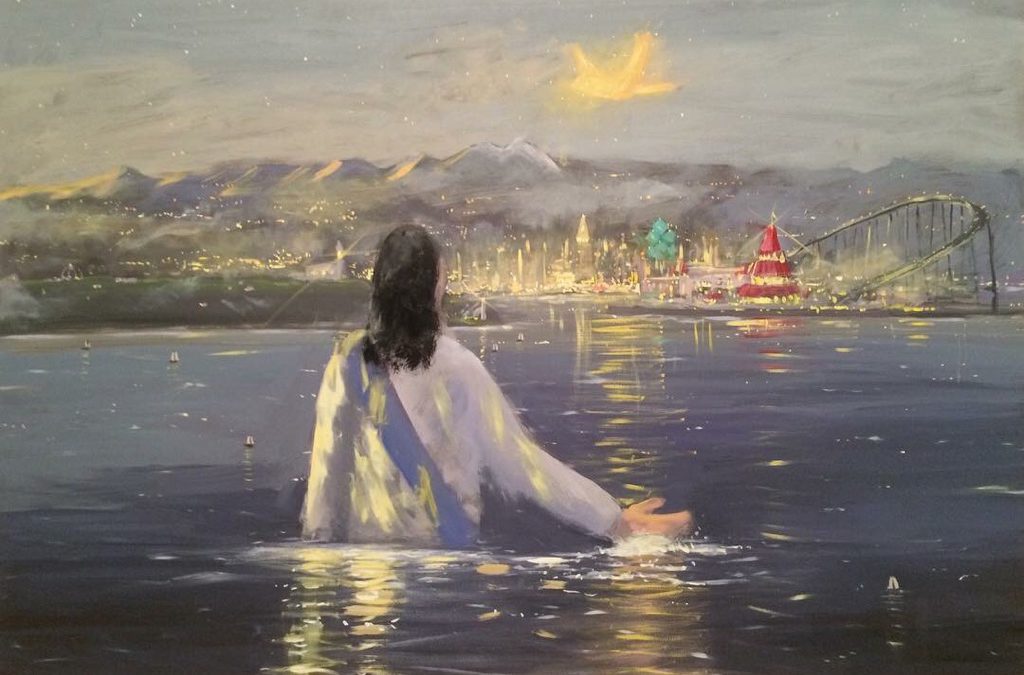 In March of 2014 while ministering in San Diego, at Foothills Christian Church, I received a vision of Jesus standing opposite Southern California. I shared the vision with the church to encourage them in their ongoing emphasis of prayer and reaching out to the younger generation of East San Diego County. I did not, however, sense the freedom to release it beyond, as I believe it was a word that would be fulfilled in the near future but not quite yet. Now is the time I sense the Lord would have me share it. While most of you reading this live far from S. California I would encourage you to pray into it. Historically God has released many things in S. California that have gone to the nations such as the Azusa Street Revival and the Jesus Movement.

Jesus, Himself, was standing some 50 miles offshore in the Pacific Ocean. He appeared to be hundreds or even thousands of feet tall and the waters were about waist high. He was facing the coast. He then dipped His right hand into the water in front of Himself and drew His hand backwards in the water. As He did so the tide dramatically went out. He then reversed His hand motion and Tsunami type waves went over the coast and basically covered all of Southern California. From north of Los Angeles south to the Mexico border, and from the coast all the way to the mountain ranges everyplace was covered with water.

Then the water went back out again but there were a number of pools and reservoirs of the Holy Spirit that had not been there before- at least to that degree. I understood that those pools and reservoirs were churches and ministries that had ‘made themselves low’ prior to the waves coming in. Through an emphasis on prayer they had been crying to God to do something to them and through them that they were not capable of in and of themselves. In effect, they had been creating a resting place for God’s Spirit.

This is what I understand, so far, about this vision.

1. The five fingers of Jesus’ hand in the water represented five distinct areas of Kingdom activity that were going to increase.
a. There would be an increase of evangelism
b. There would be a grace for restoration of estranged family members (Malachi 4.6)
c. There will be a revelation to many in the Body of Christ as to the Holiness of God. This would bring about a ‘grace based’ emphasis on “presenting your bodies a living and holy sacrifice, acceptable to God, which is your spiritual service of worship”. There will be a fresh heart desire to live conformed to the image of Christ free of sin and bondage.
d. There would be an increase in healings and miracles, signs and wonders (Acts 4.30)
e. And lastly a strong desire of many to gather together for corporate prayer meetings. In fact, I sensed that many churches that had never placed much of an emphasis on prayer meetings were going to have an overwhelming sense from God that they now had to do so.
2. Those churches and ministries that were ‘filled up fresh’ with the Holy Spirit who continued in a place of prayer and humility before the Lord and one another would grow and grow in fruitfulness. Those ministries that lost sight of their dependence on God and being led by His Spirit would continue on to a degree with what they received but would not grow past a certain level of fruitfulness.
3. While all the pools and reservoirs were filled with the Holy Spirit the actual containers were the churches themselves. Just as each of us uniquely reflects the person of Christ so each of these pools would be unique in how they responded and ministered out of the increase. There was not a religious emphasis on conformity. There was actually a great diversity of culture in how many of these churches and ministries extended the Kingdom.
4. While I do believe this is more of a sovereign word rather than conditional one I also believe that the Lord would have many respond to this word in prayer and possibly even some sort of fasting rather than simply waiting to see what happens. As with most prophecy it is an invitation to respond to the person of God and His purposes.
Marc A. Dupont
Mantle of Praise Ministries, Inc.
La Mesa, California